As a prepper, I am always looking to learn new skills and trying to make things for myself instead of buying them from the store. Today I tried candle making. Because, the store may not always be available, so it is good to know how to do things myself instead. Part of my goals were to learn how to make candles.

I started this project with just enough knowledge to be dangerous, and I kind of learned from there. The first attempt was an epic fail, but the second one worked nicely. I’m excited to share the ups and downs of this project here.

My husband and I went to the store the other day with several of these kinds of projects in mind. I decided I was going to recycle some old glass bottles that my coconut water came in. Who doesn’t love recycling? I know I am always excited to take something like that and be able to re-purpose it. 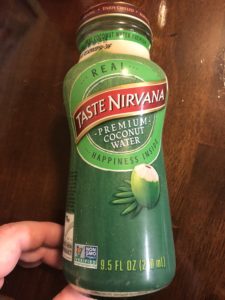 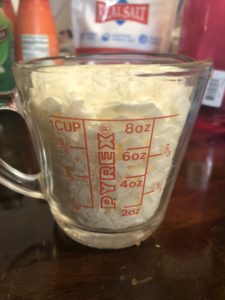 I picked up the wax, and wicks. Thinking I could use basic food coloring to color my candles. Using peppermint oil for the scent of one, so figured a nice green would be perfect. That would be fail number one for me. Food coloring is water based, and candle wax is oil based. It is literally trying to mix oil and water. For now, my candles are white. Boring, but that’s fine until I can get the oil based colors to try out. I’ll update this once I have tried that to let everyone know how it works. 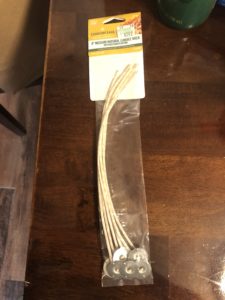 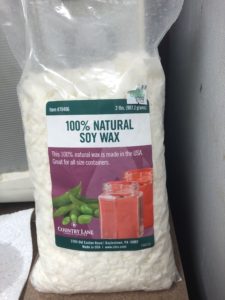 I knew I needed a double boiler to melt the wax. What I did was used an old tiny metal pot that I usually melt butter in. I have two of them, and they are probably as old as I am. Sacrificing one for my projects didn’t hurt my feelings. Plus it has a pour spout on it. I figured I didn’t need a funnel. One less step!

I had a plastic spoon from a trip to a frozen yogurt place a couple days ago, that was actually a sturdy plastic. I used that to stir the wax as it melted, so no need to clean up a regular spoon. Another way to recycle instead of throwing them in the trash! Starting with boiling some water in a bigger pan and then I used the little butter pot for the wax. Basically like a water bath, and it worked nicely. I liked the fact my weird little butter pot has a long handle, so I could hold it in the water without a problem. 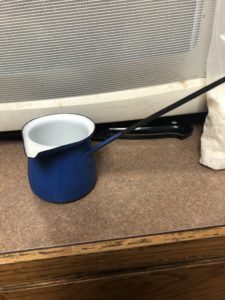 I also like the fact this made me melt the wax in small batches and measure out my wax. The glass bottle/jar I used previously contained 16.9 of liquid. It took two batches of a full cup of wax to fill the bottle up.

With the first bottle, I had issues with the metal part of the wick sticking to the bottom of the bottle. It kept coming up or wanting to go to the side of the bottle instead of in the middle. It was just sort of floating around in there. Getting the wick where I wanted it to be and staying there was a struggle. With the second bottle, I tried a different technique.

I started with putting the bottle in the freezer just long enough to get it cold to the touch. I aimed for 5-10 minutes. Not wanting it frozen because adding hot liquid to it could cause it to crack and break. I hate cleaning up glass from my floors because it goes everywhere and is like glitter. It keeps reappearing. But, I wanted to pour just enough wax in to cover the metal portion of the wick and have it set up into a solid quickly so the wick would stay in the middle, eliminating the struggle with my first attempt.

Leaving the bottle in the freezer just long enough to become cold to the touch definitely helped with this. Once I had enough wax in to cover it and get it setting up exactly where I wanted it, I put the bottle in the refrigerator to continue setting up and to be ready for the rest of the wax. I did this so it was even more solid of a base. That way if I bumped the wick when pouring the big portions of melted wax in, it wouldn’t upset what I had just worked for with setting the wick in place.

It was also at this point that I added in the essential oil. In my first attempt, I added it in as the wax was melting. It seemed like I had to add a lot for just a little scent. Not sure if it heating up with the wax had something to do with that, or if it was simply the scent I had picked. The second attempt, I added the essential oil directly into the bottle and I had a far more concentrated scent. It also mixed in with the wax as I poured it in and seemed like it was distributed more evenly, if that makes sense. Either way, it seemed like I had a stronger scent with less oil being needed. 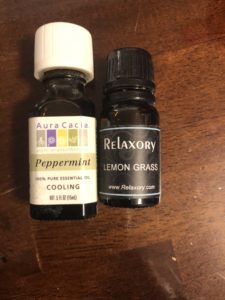 As I said, it took two batches using my method for one bottle. Once they were done and the bottle was full, I placed them in the refrigerator so it would set up faster. That way I could cut the wicks down and put a lid on them.

This was a really fun project for a few reasons. First it was a learning experience and really an adventure in trial and error. I was able to recycle some glass bottles I had laying around instead of throwing them away.

This not only gave me the ability to re-purpose them, but saves me from buying containers for this project. It taught me a new skill in my prepping journey. We should all keep candles around in case the power goes out, and it is important to know how to make something useful like that. Because they may not be readily available to purchase from the store.

Another great thing about this is that they will make wonderful gifts. I will be looking for a way to make labels for these to make them even better looking for gifts, as well as decorating the jars with a little twine and giving it a more customized look. I did find some really pretty jars at Hobby Lobby that were inexpensive. When I am ready to start making these for gifts, I will use those jars.

In terms of prepping, this could also be turned into a profitable skill. Making candles could be used for bartering if you were in a situation where you needed something or money wasn’t useable or had no value. Skills like that can easily become valuable in place of money.

23 thoughts on “Prepping and Candle Making”